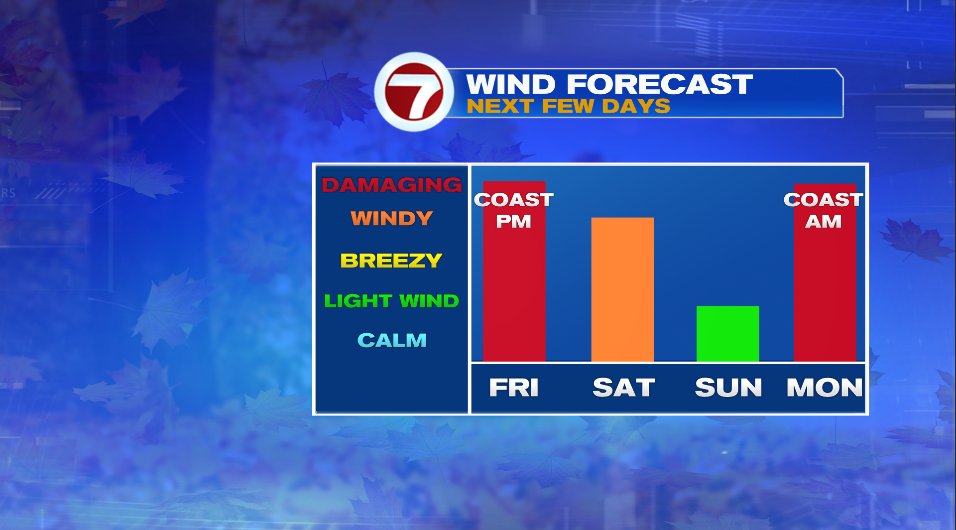 The weather will become the big story starting this afternoon and will continue through Monday afternoon. This morning it’s not bad, in fact it’s quite nice. Temperatures will climb into the low 40s for many of us today with a fair amount of cloud. Winds are fairly light early this morning, but will blow later in the day, especially tonight and overnight.

Get used to the wind. This will be the theme of our forecasts until Tuesday. I know the chart below only shows up to Monday, but the wind will still be there on Tuesday.

Ok so we’ll break this down day by day from now until Monday.

For most of us it is a cloudy and windy day. However, those of us in Cape Town and around Plymouth Bay will have rain showers this morning before changing to snow showers this afternoon. Expect nothing more than a blanket of snow when the storm passes offshore, and this threat of snow accumulation is only in Cape Town. As I said earlier, the wind will also increase later in the day. You will see on the screenshots of the future radar, I removed the temperatures and put sustained wind.

As of this blog writing (6am), the rain has moved into parts of Cape Town and Nantucket. It will fill up for more of us out there by noon and remain as rain for a few hours. Notice above at 4 p.m. we change the rain to snow showers. It will remain in the form of snow showers between about 4 p.m. and 8 p.m. before clearing the course completely around 9 p.m. this evening. The rain will turn to snow as the cold air rushes in. It is then that the winds will engage. We have wind advisories and strong wind warnings in effect from today through Saturday morning for potentially damaging winds. Any damage and threat of power failure will be isolated in the wind advisory (tan) and more dispersed in the strong wind warning (gold).

While the future radars and windscreens above show sustained winds, the wind gusts will be higher. Peak wind gusts tonight and tonight will shake like this:

Saturday is freezing. In fact, Saturday is dangerously cold. A wind chill advisory is in place for everyone beginning Friday evening and for much of Saturday. Most of Saturday will have sub-zero temperatures, but it is Saturday morning that is particularly chilly with wind chills approaching -20° in places. Under these conditions, frostbite can set in on exposed skin within 30 minutes. If you are heading west for the weekend, Western Mass has a wind chill warning where the wind chill could drop to -30°. It would lead to frostbite in just 10-15 minutes.

Sunday is our only “beautiful” day. Now, that said, it’s still going to be cool and still below par, but we have to take what we can get. The wind will drop dramatically, so temperatures of 27 degrees will feel pretty close to that. And we will keep the sunny sky around.

We’re still watching for our next storm en route for Monday, and we’re really going in the night after midnight Sunday night/early Monday. The trend has been pretty consistent and models are increasingly in agreement that this storm will follow an inland track, which means it’s a “warmer” storm for us. Of course, a warmer storm means less in terms of snowfall. If it took a trail further offshore, we would be colder and be in line for significant snow. With this trail, heavy snow will settle in New York State and Northern New England/Ski Country. It’s not all bad news! Ski Country desperately needs snow. For us, it’s more of a messy mix put together. That said, we will still see snow! But since it mixes with rain and sleet, it will reduce the number a bit.

As I said at the beginning of the blog, we will also have to watch for the potential for damaging winds which also arrive Sunday evening/Monday morning, especially for those on the coast. Once we are within 48 hours of the storm (so Saturday morning) we will have a much better picture of the storm. At this point, we can start talking about wind gust forecasts, precipitation amounts, and perhaps most importantly for many of us, snowfall amounts.