Twitter sales totaled $1.18 billion in the second quarter, down from the $1.32 billion estimated by analysts.

Twitter Inc. reported disappointing second-quarter sales on Friday, another blow to a company already in a high-profile legal battle with Elon Musk over the fate of the social network.

Revenue fell 1% in the quarter from a year earlier, its first annual decline since the midpoint of the pandemic in 2020. Sales totaled $1.18 billion in the quarter, which is lower than the $1.32 billion estimated by analysts. The company said “ad industry headwinds associated with the macro environment as well as uncertainty related to the impending acquisition of Twitter” were factors in the disappointing results.

Twitter added 8.8 million new users during the quarter, in line with analyst estimates.

It’s unclear what Friday’s earnings report really means for investors as the company’s fate remains in limbo. Until two weeks ago, Twitter had to sell the company to Musk for $54.20 a share, making its financial reporting little more than a formality while it waits for the deal to close.

But Musk tried to back out of the deal on July 8, saying Twitter had failed to provide information about the number of fake accounts plaguing the site. Twitter reiterated in its earnings release on Friday that it believes fake or spam accounts accounted for less than 5% of its total user base, a claim Musk has repeatedly questioned.

Both sides are preparing for a trial, expected in October, in which Twitter will ask a judge to force the CEO of Tesla Inc. to honor his purchase agreement to buy the company for around $44 billion.

“This makes the investment case for Twitter difficult to present at this stage,” wrote Youssef Squali, an analyst at Truist Securities, after Musk’s announcement. Truist estimated the shares could trade “in the high $20s” if the deal falls through.

If the deal fails, Twitter’s business could be in trouble. The company had previously set a goal of reaching 315 million daily users by the end of 2023 and growing revenue to $7.5 billion a year by the same time. Currently, Twitter is not on track to meet the user goal. It reported 237.8 million monetizable daily active users on average in the second quarter. 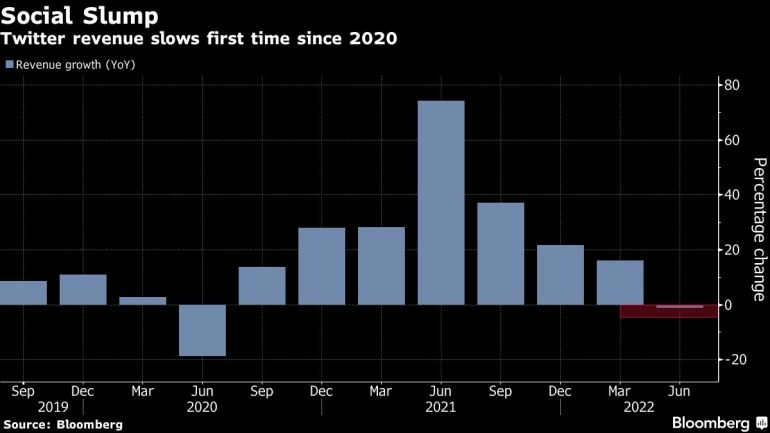 Like many of its social media peers, Twitter is also facing a major downturn in advertiser spending and growing competition from TikTok for viewers. Snap Inc. foreshadowed the industry’s struggles on Thursday by reporting disappointing sales, citing advertisers cutting budgets more than expected due to global economic uncertainty, but also increased competition for dwindling marketing dollars.

Twitter shares, already weakened after Snap results, fell 2.2% in premarket trading in New York. They are down nearly 9% this year.

Twitter’s net loss was $270 million in the quarter, a loss of 35 cents per share. That compares with net income of $66 million and earnings per share of 8 cents in the same period a year earlier.

Twitter does not hold calls for analysts to discuss earnings and only issued a short press release with minimal detail compared to its usual letter to shareholders. In previous quarterly results in April, Twitter withdrew its prior outlook and said it would not provide forward guidance.

–With help from Karen Lin.