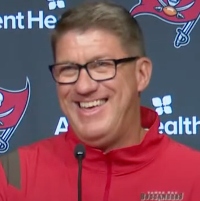 It’s almost like lovebugs in May, when the NFL Draft rolls around, you can pretty much bet on this one thing:

Bucs AC/DC loving general manager Jason Licht will make a trade in the draft. Sometimes he will swap. Sometimes he will trade (like in 2018 when he traded in the first round to Buffalo and with one of the two second-round picks he acquired he used to trade to the Belicheats who eventually became Carlton Davis and Jordan Whitehead – three starters on a Super Bowl-winning defense).

Now, this trade is hard to beat. But BSPN’s Seth Welder, a numbers guy, really liked the way Licht traded the first round last week and in exchange for that trade to the Jags, he picked up what should be two starters for a long time. It would be Logan Hall and Luke Goedeke.

This trade was particularly difficult for Jacksonville (or strong for Tampa Bay, depending on your perspective) due to the two picks made before it.

Yesterday Joe mentioned that soccer strangers‘ Mike Tanier called the craft ‘wise’. If Goedeke starts, it could turn out to be a master trade by Licht.

Accustomed to being on top, but believe this is the first month we’ve topped other handsets. 👈
A special thank you to all the fans for your support.
Data from @SimilarWeb pic.twitter.com/izq9KfGzeK