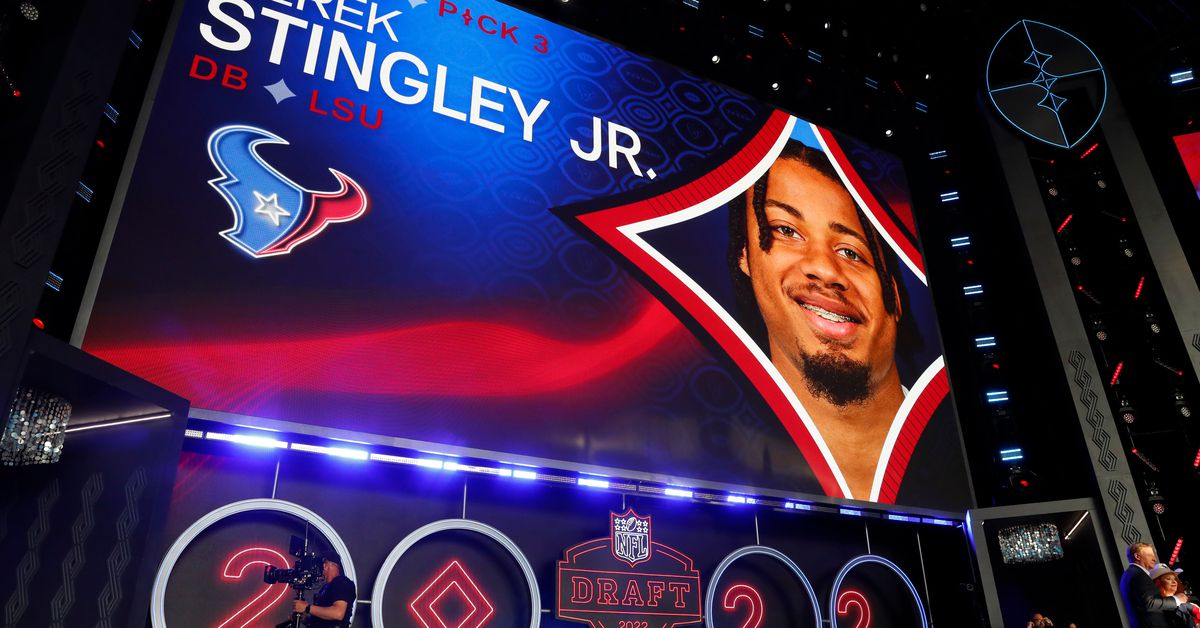 Houston, TX – Many emotions define the NFL Draft. Excitement, anticipation, accomplishment, trepidation, a bit of fear/dread. They come from the players, seeing the culmination of a lifetime of dreams. They come from fans who look to the future with hope. They come from Roger Goodell, praying that none of these guys crush him so hard in a male embrace that he suffocates. Emotions run high that night.

However, there was a team that had a very different feeling/emotion. For the Houston Texans, there was the strangest of feelings. No hope or optimism, admittedly two concepts somewhat foreign to the team and the fanbase. Emotion: justification. As if all the hard work of the past few seasons is coming to a focus/endgame.

“Actually, I prefer the term validation myself,” noted a rather playful Jack Easterby. “Vindication…the root of this one is a little too close to ‘vindictive’ and honestly, I’m just not that kind of person. With the Lord’s love within me, and me in an ordained place of power to project His message to the masses, I need not concern myself with the little things of the world, like “hate” or “jealousy.” or “a desire to take all the words written by my greatest detractors, wrap them all up in a beautiful shiny offering plate, and sink them into all their Sodom and Gomorrah [Easterbys!!!]”…oh no, I, the humblest servant of the Lord and driver of the Houston Texans, would never stoop to such levels.”

After this message from the self-proclaimed Messenger of the Gospel of the Texan Saints, our reporter sought to follow up:

“So why would you even think of revenge…or, sorry, validation as a theme for you and the team?”

“You mean the team and ME. Team always comes first, remember that…well, right after the highest powered serve, but you get the idea. Anyway, while I myself am above the pettiness of men, those who toil beneath me, uh, work with me in the quest for divine Texansdom, well, they monitor my media gospel social, and they were appalled that my, uh, our message was clouded by a lot of slander and blasphemous lies. The offspring of the devil pervades this realm. Yet, as Executive Vice President of Football Operations and Ayatollah of Texans Most Blessed, you just have to step above that.

When our reporter noted that many people were sour on Easterby due to his role in personnel decisions over the past few years, the Exalted Easterby was quick to respond:

“Oh you of little faith. The path to salvation and football heaven is not easy, nor easy. There are challenges that we have to face. Just like the noble literary personification of John Bunyan, you must go through pain and suffering, purge the soul of all unjust thoughts. For example, the blasphemy of the “Smart, Tough, Dependable” doctrine. We’ve been there. »

“And I’m not one to brag, this very humble political battlelord of the royal in-house team. HOWEVER, if I was cursed with an overabundance of self-respect, I’d be in for a major witch hunt to unearth the inside sources of these SI.com hit tracks, threatening to Torquemada their [Easterbys] to eternal damnation… Obviously, I’m not… well, yeah, about all that, well, I think we know how things went.

“I asked the team to cleanse the contagion of ‘That Player’. While said ‘That Player’ had a few moments, his deceit and lies caught up with him, as he is burdened with a major suspension which will hurt his ranking and his access to the dresses of Babylon.

“The ‘false franchisor’. Oh, how I tried to curry her favor, and tried to reach her thirsty, thirsty soul, to quench the rising sin within. Alas, he let himself be left out of the way. Twisted and corrupted by sin. Even when I, uh, us, made the management and personnel changes that would bring this divinely ordained talent back to the team, he was content to cringe and rip his clothes off, hiding behind his ill-gotten gains. Well, maybe Caesar passed judgment on him, but the real judgment was passed, and so he went to the land of eternal cold and misery. Perhaps he finds forgiveness from the Lord. Ok, he could have had a real divine forgiveness from me, uh, the team… sorry for those slips….

“Oh, and then there was the whole thing with O’Brien. You know, I only have love for man, a bit like I have for everyone, just like the Lord. Even heretics. Yes, BO’B was arrogant, stubborn, and power-hungry, but we did just fine. Of course, when it came to assigning blame, uh, the main focal point for all leadership decisions, well, the guy was the general manager and the head coach. I was just a humble helper with a servant’s heart. Well, his place in the next realm is fine, but you have to pay the piper, and he clearly had to go. I just sent her a special order from the Easterby to celebrate the accomplishment.

“With these moves, we could really remake the Texans in my…hey, I do it again…redo the Texans according to the divine plan. Adherents to the Word were indispensable, as were loyal and faithful minions, uh, servants, uh employees… yeah, employees. Next, the unworthy had to be purged. No false idols here, no matter what good works they have done. The other day we purged another of the “Smart, Tough, Dependable” heretics.

“Now you can see the fruits of our labor. They’ll be studying the books with passion… and then maybe get a chance to see a playbook again. Oh, and we just installed the new baptismal pool in the locker room. We will purge them of their iniquity as soon as they enter the blessed kingdom of the Texans. Sure, a vet or two may feel bitter about losing the old hot tub, but what is their unease with the purification needed to keep up with the Easterby… oh fiddlesticks, I did it again!! ! I meant the Texans path to glory. Blessings be upon you all.

With that, we leave you, good reader, with this update and will continue to deliver the latest and greatest.

Also, we need a new reporter, because the first one to file this story apparently had a nervous breakdown. We don’t have all the details, but we did get this image from the doctor treating said person, a recent first-mission college graduate: