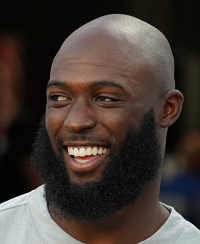 This Leonard Fournette story brought to mind Joe’s in-person disagreements with Bucs coaches and executives over more than 14 years covering the team.

Joe has always maintained that die-hard fans care more about the Bucs than the players, coaches and costumes. This statement seems to infuriate Bucs types. They usually maintain that it’s impossible and shit Joe, you don’t understand One Buc Palace’s commitment, you asshole.

Joe always counters by stating that true fans would never give up on the team and that legions are spending money on the club that they simply cannot afford. Few or none at One Buc Palace can say that, Joe thinks. Mr. Coach, executive, player would rush to a new team in the blink of an eye when his big-budget job expired. Heck, he/she might even try to broker a new out-of-town deal during football season.

Enter Leonard “Lombardi Lenny” Fournette and his cat on Bussin’ with the boys last month.

It’s true, Fournette didn’t look at it. Lombardi Lenny said he was sleeping and if you have a problem with that call his doctor who prescribed plenty of rest for his then bad hamstring.

And Lombardi Lenny gave another reason why he didn’t watch. “Because we’re playing against the Jets.”

Do not mistake yourself. Joe thinks of Fournette no less and he is one of Joe’s favorite Bucs. This story simply illustrates the fans and players often move in very different worlds.