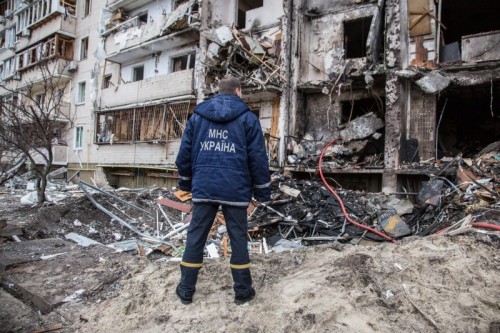 Experts from universities in the United Kingdom and the United States have refocused their research activities to quickly create a system that provides a common account of atrocities committed in Ukraine, built from social media accounts located in the country.

MOBILIZE, an existing project on Ukrainians at home and abroad funded by the ESRC and ORA, responded to the humanitarian emergency by combining their expertise with that of three other institutions in the United States. With their quick thinking, they can now document and trace the displacement of people, human rights abuses, humanitarian needs and civilian resistance to invasion, all in real time.

New Data for Ukraine The project analyzes Twitter data using machine learning algorithms. It is able to flag important events hours before the media by demonstrating believable tweet spikes on certain topics the team is tracking, as well as mapping where those events are taking place. It focuses on four areas: humanitarian needs, displaced persons, civil resistance and human rights violations.

Dr Olga Onuch, a Ukrainian lecturer in politics at the University of Manchester, identified the accounts to monitor and created a list of over 600 keywords for the system to check. It captures living language – for example, a protest can be mentioned in Ukrainian or Russian with the colloquial Soviet-era language of a “meeting”.

She hopes this work can help in two ways: in the moment, by helping aid agencies direct resources to people fleeing the fighting, and in the long term, by continuously documenting abuses and atrocities for eventual justice.

In one instance, its tracking of civil resistance and human rights abuses immediately identified the start of a major event – Russian forces firing on peaceful protesters in the southern city of Kherson on March 21 – while it registered as a peak on one of the main charts on the project’s website.