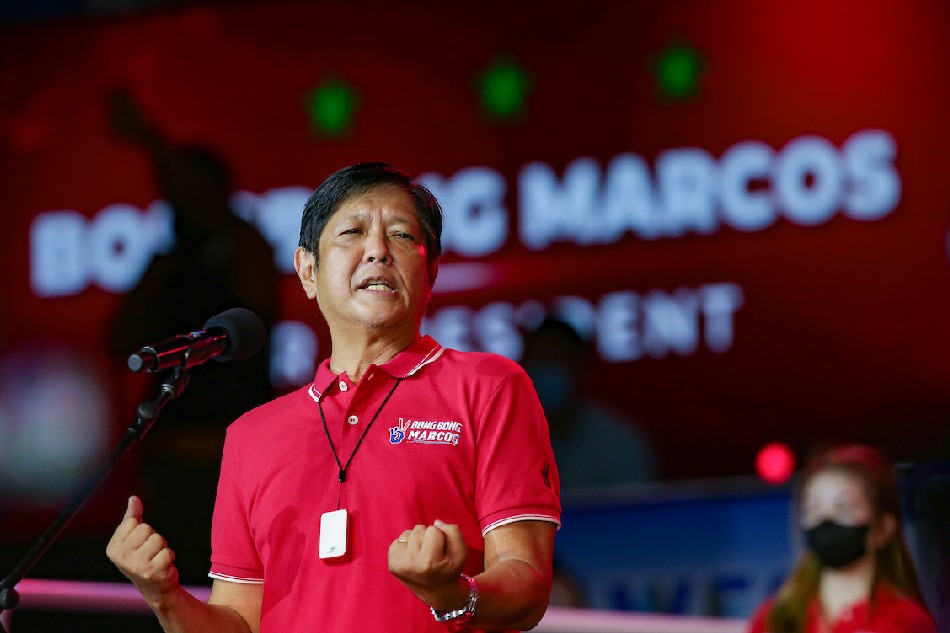 Editor’s note: Second in a series of ABS-CBN News on the presence on Facebook of the 2022 Halalan presidential candidates.

MANILA — Former Senator Ferdinand “Bongbong” Marcos Jr., who led polls ahead of the May 2022 presidential elections, has also been dominating Facebook interactions since 2016.

Posts by or about Marcos and his family have garnered more than 700 million Facebook reactions, comments and shares since 2016, research by ABS-CBN News using Facebook’s metrics tool found.

Among the top five presidential candidates in the Pulse Asia survey from March 17-21, 2022, Marcos has had the most interactions on Facebook over the past six years, meaning he potentially has the most big slice of the conversation pie on this social networking site. .

These figures were obtained by running the keywords “Marcos”, “BBM”, “Marcos by rin”, “Bongbong”, “Marcos Jr”, “Bongbong Marcos Jr”, “Ferdinand Marcos Jr” via the search function from CrowdTangle, which describes itself as “a public information tool from Meta that makes it easy to track, analyze, and report on what’s happening with public content on social media.”

The interaction count is “agnostic” in the sense that it does not distinguish between positive or negative sentiment.

The search captures mentions of keywords outside of the Philippine electoral context – Manchester United’s Marcos Rojo, for example. But the figures recorded are not enough to change the general ranking of the former senator in terms of the number of interactions on Facebook.

In 2016, the year Marcos ran and lost as VP to Leni Robredo, there were 416,937 posts about him that garnered around 87 million interactions.

Topping the list of posts with the most interactions was a Facebook live session on November 19, 2016, where the account claiming to be a “media news company”, conducted a 4-hour live poll to find out if people were in favor or not of the burial of Marcos Sr., the father and namesake of Bongbong, in the Libingan ng mga Bayani.

The live post garnered a total of 401,170 interactions – likes, comments, shares and reactions.

The page that posted it, https://www.facebook.com/jam889official has for its intro, “We love you, that’s why we’re all about TODAY’S HIT MUSIC. #AllHitsAllJam !” and was created in April 2013. It has 56,615 likes, 76,266 followers and has Dasmariñas listed as its location.

His Twitter account, https://twitter.com/Jam889OFFICIAL, created in March 2013, however specifies that his location is in Legazpi. He has 6 followers. A search for other social media accounts named “jam889official” led to https://jam889official.blogspot.com/

Efforts to reach out and get the side of Jam 88.9 FM failed.

Facebook, now Meta, was asked to respond to the strange online behavior of a page it had verified. Since the publication of this story, Jam 88.9 FM, the largest contributor of interactions to a Marcos conversation in 2016, now appears offline.

In a statement to ABS-CBN News, Meta said he was doing routine checks and would continue to try to do so to stay one step ahead of actors trying to outsmart his site.

“In this case, this page has violated our inauthentic behavior and spam policies, which prohibit attempts to buy and sell pages and trade site privileges to grow their audience. Since spammers s are always adapting to try to circumvent our rules, we will continue to monitor and take appropriate action to stay ahead of them,” a spokesperson for Meta said.

Other Marcos-related posts with great interactions in 2016:

• Message from the Student Council of UP Diliman University on May 7, 2016
Total number of interactions: 329,721

The rest of the major Marcos-related posts in 2016 involved discussions of whether the Marcos family really stole public funds, anti-Robredo sentiments, anti-Mar sentiments Roxas (Roxas, former Secretary of the Interior and Local Government, was then a presidential candidate), justifications and alleged public outcry for a hero’s burial for Marcos Sr. for being a supposed war hero, former Vice President Doy Laurel reportedly said that the corruption under President Cory Aquino was worse than under the Marcos regime, and investigates the likeness of Marcos Sr. on the P500 bill.

Over the next few years, posts mentioning Marcos continued to revolve around his family, although there were far fewer interactions in 2017.

In 2018, there were several pages with the same messages about the bravery of Marcos Sr. and how the Marcos’ court convictions for ill-gotten riches were lies. The common theme is that the Marcos acquired their wealth legally – either through the gold trade or as a reward – and that the Marcos advocated sharing their wealth in order to save Filipinos from poverty. Several of these have already been flagged by fact-checkers as misinformation, but many remain publicly available and unchallenged.

A video posted on June 11, 2018 by a Facebook page called PSSAP Underground Media saying that Marcos Sr. couldn’t have stolen funds larger than the country’s budget when he was president has 3.4 million views. Comprised of footage and screenshots of various news outlet coverage, the post has around 272,900 interactions.

Meanwhile, a message posted on April 12, 2018 by the page of Radyo Pilipinas, a radio station owned and operated by the Philippine Broadcasting Service, an agency under the Presidential Office of Communications Operations, featured a conversation between the personality of the broadcast Erwin Tulfo and Ilocos Norte. Governor Imee Marcos.

In the video, Tulfo claims to have seen a “Build, Build, Build” plan as allegedly planned by former President Marcos, to which Marcos’ daughter, Imee, agreed.

Years later, on the eve of a change of administration, President Rodrigo Duterte’s regime declared the “Build, Build, Build” program one of its legacies. The tandem of Marcos Jr. and his running mate Sara, Duterte’s daughter, would vow to continue the program.

In election year 2019, the post on Marcos with the fourth highest volume of interactions was a photo of a possible tandem for the 2022 polls.

The Facebook page of the Pinoy kami blog posted a composite of photos of Marcos Jr. and Davao Mayor Sara Duterte leading the way with “Road to 2022” on February 19, 2019.

In 2019, there were more Duterte-related posts — posts that talked about President Duterte’s accomplishments but also referenced Bongbong or his sister Imee who was then a Senate candidate.

A post from ‘Bongbong Marcos-Sara Duterte 2022’ – a Facebook page created on May 11, 2018 – claimed that Marcos Sr. planned to take Sabah with supposedly very powerful armed forces at his disposal, then later showed photos of various air and sea military assets that many Facebook users claimed belonged to other countries or were purchased long after the dictator’s tenure, and were therefore fake.

As of April 14, the post had 99,000 reactions and had been shared 227,000 times. It was also referred to the ABS-CBN News fact-checking group for possible misleading or erroneous information.

In 2020, the year the Philippines’ COVID-19 lockdown began, a man named “Francis Leo Marcos” gained popularity on social media, and examples of his alleged generosity were posted on Facebook. Posts about him topped the list of Marcos-related interactions.

Yet even with around 4.5 million interactions on Francis Leo’s posts, Marcos Jr. and his family retained around 85 million reactions, comments and shares in 2020, thanks to videos about or showing the former Marcos. which gained a high number of interactions.

In 2021, content about Marcos Jr. and his family had the biggest increase in their interaction volume on Facebook with a total of 381,307,089 reactions, comments and shares – 6 times the average volume of annual interactions they have had in the previous 5 years.

The interactions peaked on Nov. 7, 2021 on posts about the motorcade held in the Ilocos region in support of Marcos Jr., with Bongbong himself posting a photo that had a total of 825,284 interactions and was shared by around 100 pages. Facebook.

Organizers claimed it was the “longest motorcade” in the country, joined by thousands of supporters and supposedly stretching over 125 kilometres. VERA Files has debunked this in a fact check.

ABS-CBN News reached out to Marcos’ camp to comment on these pages or their general stance on this type of content on Facebook. They have yet to respond as of press time.

But Marcos Jr. denied the existence of alleged troll farms in his campaign, as well as their influence to revise history.

2022-05-02
Previous Post: Look of Her Majesty’s Buckingham Palace balcony ‘not guaranteed’ as Charles embarks on new project
Next Post: It’s Complicated – The Importance of Choices