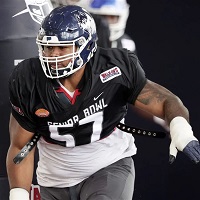 Diving in the Trenches – JoeBucsFan.com

Diving in the trenches

A JoeBucsFan.com guy, much-talked-about draft guru Sean Sullivan, remains available for the Bucs when the draft reopens for Rounds 2 and 3 tonight at 7 p.m.

And he wasn’t on the list of potential targets Joe tapped in the wee hours last night.

Joe refers to the beastly Travis Jones of the University of Connecticut. He weighs 6-4,325 pounds with only 13% body fat – think about it! — and became his team’s defensive leader with 48 tackles and 4 1/2 sacks amid consistent double and triple teams.

One of Joe’s favorite movie gurus, Lance Zierlein (son of famed offensive line coach Larry Zierlein, who worked for Bucco Bruce Arians in Pittsburgh and Arizona) kicked off a mock second-round draft today. today and named Jones as the Buccaneers’ first pick when the bell rings with the No. 33 overall pick. The Bucs got that pick in their trade to Jacksonville.

The word on Jones is that he has the raw pass rush ability. Joe’s first choice isn’t defensive tackle at No. 33, as the Bucs should be able to get a good one later in the round. However, Joe will always stand tall and applaud the drafting of an inner monster.