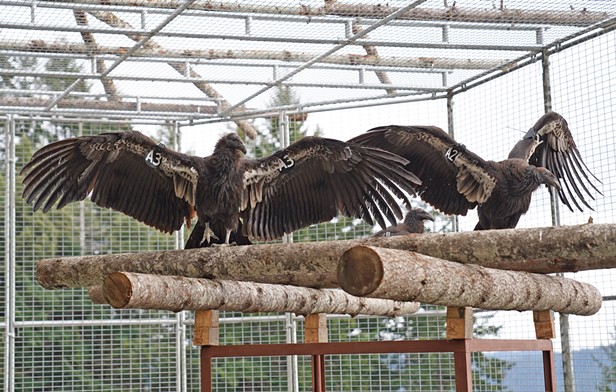 Condors return to the skies of the North Shore (with video)

Around 10:30 a.m. today, two young California condors made their first adventure in the wild, and the Northern California Condor Restoration Program kicked off, bringing back the bird known to the Yurok Tribe as the prey-go-neesh in the sky above their ancestor. lands after more than a century of absence.

The moment culminates 15 years of planning, outreach and research by the Yurok Tribe, who lead the program in partnership with the National Park Service and the U.S. Fish and Wildlife Service, and marks the first release of the critically endangered species to extinction in the north of its former territory.

Yurok Wildlife Department Director Tiana Williams-Claussen cried during a live broadcast of the event as she watched the two captive-bred birds spread their massive wings in the open for the very first time.

“I am so deeply happy,” she said, thanking the individuals and agencies who participated in the effort and especially thanking the tribal elders for realizing the cultural and ecological importance of bringing back the sacred bird in the lands of Yurok. “I’m so grateful that this day has finally come.”

A3, an almost 2-year-old male who emerged first, was nicknamed

“Poy’-we-son”, which the Yurok tribe says translates to “one who goes ahead”, but also refers to the traditional name of a village leader, who helps lead and guide the village in a good way. “

He showed dominant traits during his time with the other three juvenile condors as the group spent the last week socializing and learning life skills from mentor bird No. 46, who is currently on loan to the program. restoration of Northern California.

Williams-Claussen says she expects Poy’-we-son to be a leader of the flock that will be expanded with new birds every year for the next 20 or so years, with the goal of building a self-sustaining population which will eventually make its way to the Pacific Northwest.

The second to take flight was A2, nicknamed “Nes-kwe-chokw”, which translates to “He’s coming back” or “He’s coming”, which Williams-Claussen says “is representative of the historic moment we just came from. live, and the return of the condors, in free flight, to the Yurok and the surrounding landscape.”

She describes A2 as a “confident bird” who is “often seen jockeying with A3 in play” but also to establish his place in the hierarchy of the flock, and “with the will to do well in the wild”.

The other two – A1 and A0, the only woman – are expected to be released at a later date, partly because A1 has a broken satellite transmitter that cannot be repaired until around June.

While Poy’-we-son and Nes-kwe-chokw are free to soar on thermals that they can cover 100 miles with one wing flapping, program staff will continue to monitor bird movements via transmitters radio and satellite.

back to the hill, where staff will continue to put out carrion for food in an open but fenced area adjacent to the screened atrium, allowing socializing to continue through the mesh as the highly interactive birds adapt to their new environment.