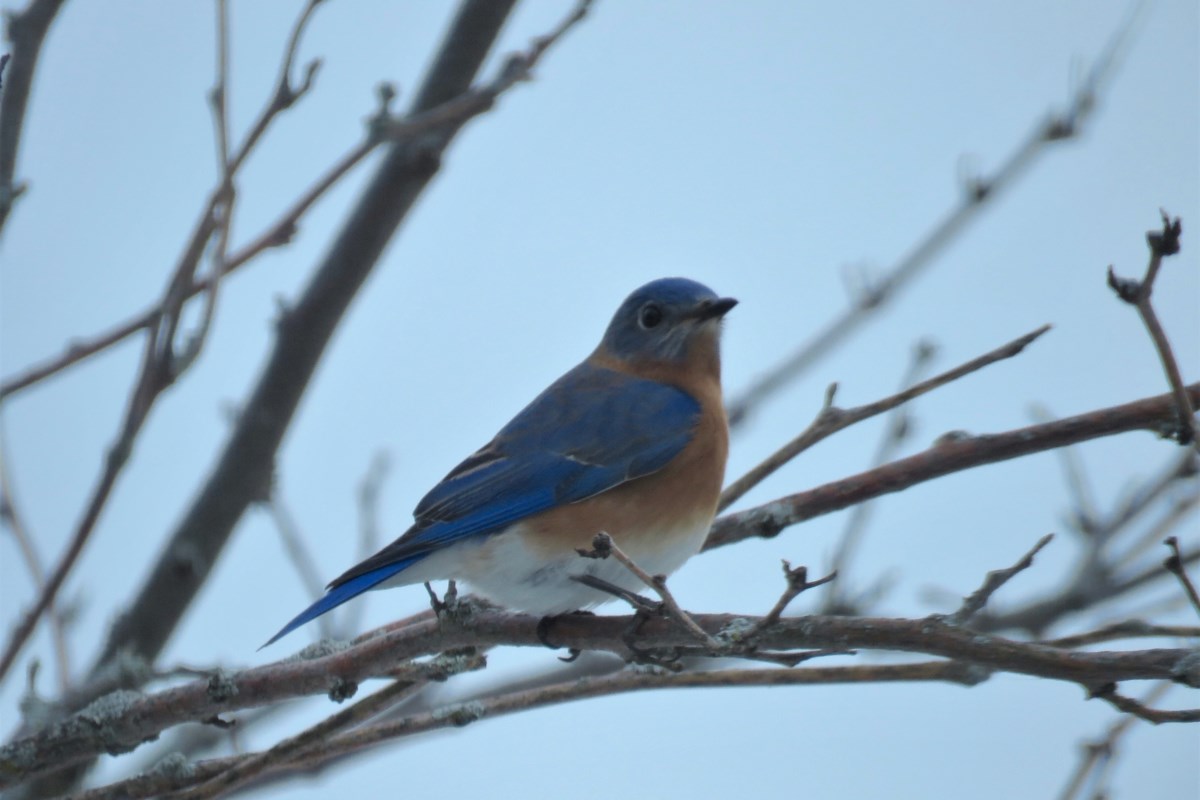 My January started with three Eastern Bluebirds visiting. According to my expectations, they should be in the sunny south for the winter. Instead, they sat defiantly on the fence in a cold January rain. I suspect these bluebirds are siblings that hatched in one of my bluebird nest boxes.

I have spoken about bluebirds from time to time because the purpose of this column is to discuss the behaviors and sightings of birds on the farm where I live.

Eastern Bluebirds have been remarkable and beautiful additions to the neighborhood since I installed two nesting boxes in the spring of 2020.

Bluebirds also have the reputation of being winged messengers of happiness. Many cultures around the world, including the indigenous peoples of North America, view bluebird watching as a symbol of hope, renewal, and love. I have to say that on that first day of January, with gloomy weather and difficult news about the state of the pandemic, they offered lift and comfort.

I have seen them since, and I take heart each time.

It seems that it is not entirely unusual to see Eastern Bluebirds in southern Ontario in the winter. The Birds of the World website states that bluebirds are partial migrants, “with migration associated with weather conditions and/or food availability.” He goes on to say that more studies are needed on what influences an individual bird, or group of birds, to choose to stay near nesting areas, and others to move south.

The bluebirds that have visited me seem to tolerate the cold. They checked the nesting boxes although it doesn’t seem like they spend nights there like they might. There are options for them with plenty of barn space for them to snuggle up for the night. Besides insects, they eat wild berries and fruits. Another member of the thrush family, the American Robin, also sometimes chooses to experience Ontario winters by enjoying frozen fruits and berries. Both generally work well.

Sightings of both are associated with spring. Seeing them in winter assures us that spring will return and brightens up even the most miserable days. Perhaps even thinking of such cheerful birds can be uplifting.

While researching the association of bluebirds with happiness, I came across a 1934 song called “The Bluebird of Happiness.” According to the Song of America website, he was very famous in the early 20th century. “Over a million copies of recordings of this song have been sold. The music is by Santor Harmati and the text is by Edward Heyman”.

The song’s message is timeless and explains how, regardless of the situation in life, we all have a similar emotional experience:

The visiting Eastern Bluebirds throughout January, and especially on the first rainy day, reflect the theme of the song and convey a message of hope that we can all benefit from.

And if things don’t seem so happy,
Just show a little fight,

The song ends with the songwriter’s vocals:

Be like me, keep your head up,
‘Until you see a ray of light and joy.
And remember this, life is not an abyss,
Somewhere there is a blue bird of happiness.

Rosaleen Egan is a freelance journalist, storyteller and playwright. She blogs on her website: rosiewrites.com